Check back for more info.

Join the Everett Public Library for a celebration of poetry on April 20 at 5pm Pacific. Everett Poetry Night will feature two poets whose work is inspired by their lives and experiences in Everett.

Steve K. Bertrand and Jeanne-Marie Osterman will talk about poetry and each will read a selection of their Everett-inspired poems.

Steve K. Bertrand is an award-winning poet, historian and photographer. His poems, stories and articles have appeared in numerous publications locally, nationally and internationally. In addition, Steve has had a long career as a teacher/coach in the Everett School District. Steve has been very involved in lectures and poetry readings throughout the Pacific Northwest. The author of over 35 books, Steve lives in Mukilteo.

Jeanne-Marie Osterman was born and raised in Everett. She is the author of There’s a Hum and Shellback. Her poems have appeared in Borderlands, Cathexis Northwest, 45th Parallel Magazine, The Madison Review, California Quarterly, and other publications. A finalist for the 2018 Joy Harjo Poetry Award and 2017 Levis Prize in Poetry, she is poetry editor for cagibilit.com, a journal of prose and poetry.

The daughter of a World War II naval combat veteran remembers her father—from her mid-century childhood in the Pacific Northwest, to his death at age 98—in her collection Shellback.

In honor of International Women’s Day, the Philippine Embassy in Washington DC is hosting a panel discussion on Monday, March 8 at 2pm Pacific / 5pm Eastern, featuring Filipino women writers Cecilia Manguerra Brainard, Migs Bravo Dutt, Dr. Luisa A. Igloria and Gayle Romasanta. The event will be moderated by Aileen Cassinetto, and will stream live on the Embassy’s Facebook page: @PHinUSA 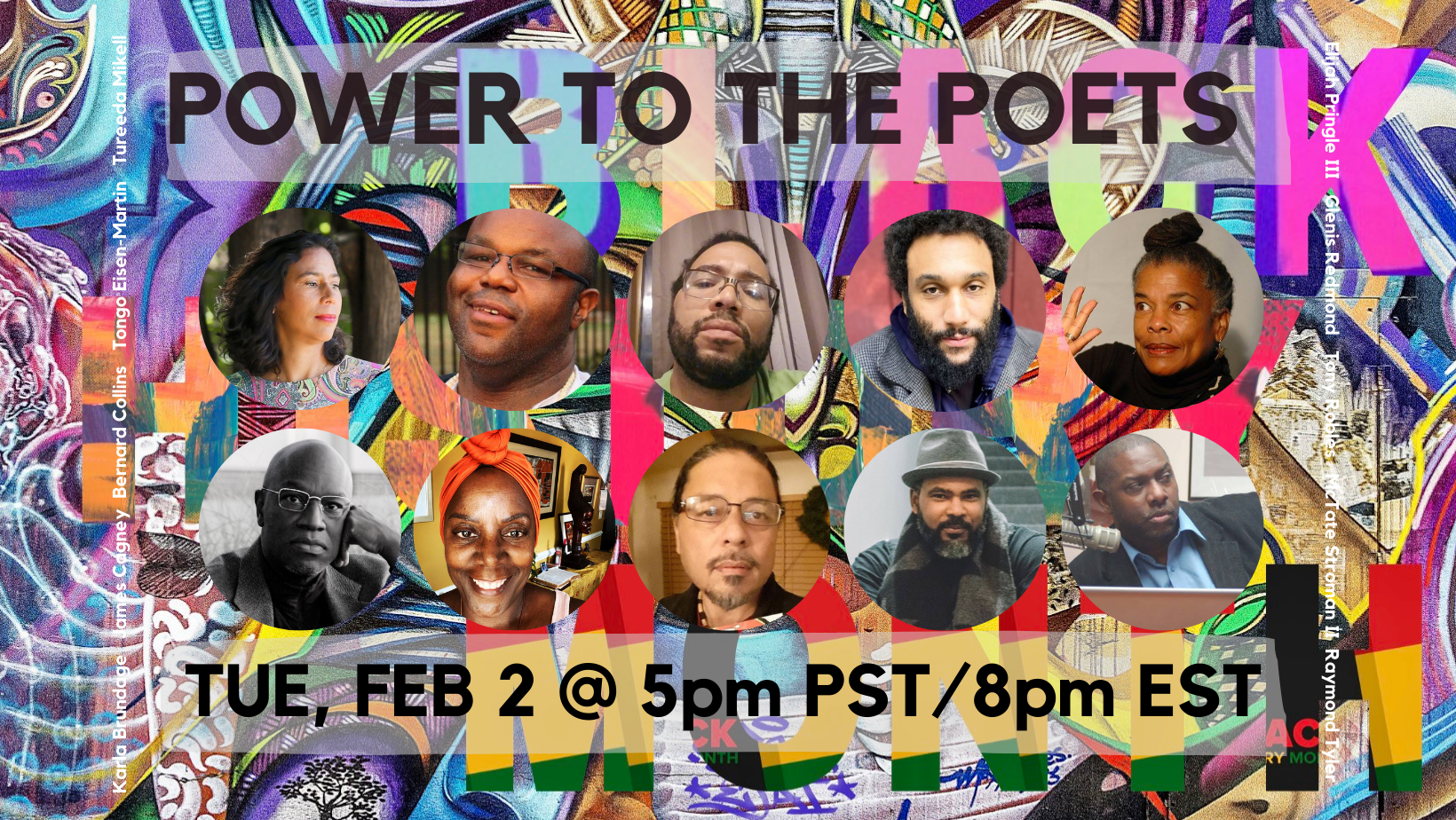 Please save the date for Power to the Poets: Black History Month!

Check out previous POWER TO THE POETS events here.

About the featured readers:

Frederick O. Foote, MD, CAPT, MC, USN (Ret.) is the author of Medic Against Bomb: A Doctor’s Poetry of War, winner of the Grayson Books Poetry Prize. A retired Navy doctor and neurologist, Dr. Foote leads the Warrior Poetry Project, which engages veterans with brain injury and PTSD in arts activities and sports activities to promote healing, and is poetry editor of O-Dark-Thirty, the literary journal of the Veterans Writing Project. He is also founder of the Green Road, a $3 million, ½ mile long healing garden for Wounded Warriors at the Walter Reed National Military Medical Center, the nation’s largest hospital-based healing garden.

Jeanne-Marie Osterman is the author of SHELLBACK, a “searing portrait of the poet’s father as a Depression-era boy and a Navy World War II veteran,” forthcoming from Paloma Press. She is also the author of There’s a Hum from Finishing Line Press. Her poems have appeared in Borderlands, Cathexis Northwest, 45th Parallel Magazine, The Madison Review, and elsewhere. A finalist for the 2018 Joy Harjo Poetry Award and 2017 Levis Prize in Poetry, she is poetry editor for Cagibi, a journal of prose and poetry.

The link to register & join is: https://www.crowdcast.io/e/reaching-for-joy

Order of appearance. Readers may or may not read from the books presented.

Jeanne-Marie Osterman is the author of the book of poems Shellback, forthcoming February 1 from Paloma Press, and There’s a Hum (Finishing Line Press). Her poems have appeared in Borderlands, Cathexis Northwest, 45th Parallel Magazine, The Madison Review, and elsewhere.

A finalist for the 2018 Joy Harjo Poetry Award and 2017 Levis Prize in Poetry, she is poetry editor for CAGIBI.

Janice N. Harrington writes poetry and children’s books. She grew up in Alabama and Nebraska, and both those settings, especially rural Alabama, figure largely in her writing. Her first book of poetry, Even the Hollow My Body Made Is Gone (2007), won the A. Poulin, Jr. Poetry Prize from BOA Editions and the Kate Tufts Discovery Award. Her second book of poetry, The Hands of Strangers: Poems from the Nursing Home, came out in 2011, and her third book, Primitive: The Art and Life of Horace H. Pippin, appeared in 2016. She is also the winner of a National Endowment for the Arts Literature Fellowship for Poetry and a Rona Jaffe Foundation Writers’ Award for emerging women writers.

Harrington’s children’s books have won many awards and citations, including a listing among TIME Magazine’s top 10 children’s books and the Ezra Jack Keats Award from the New York Public Library.

Harrington’s poetry appears regularly in American literary magazines. She has worked as a public librarian and now teaches in the creative writing program at the University of Illinois.

Laure-Anne Bosselaar is the author of These Many Rooms (Four Way Books, 2019) and the current Poet Laureate of Santa Barbara.

She is also the author of The Hour Between Dog and Wolf, and of Small Gods of Grief, which won the Isabella Gardner Prize for Poetry. In 2007, Ausable Press published her third poetry collection A New Hunger which the American Library Association selected as Notable Book for 2008. She is also an anthologist, translator, editor and consultant.

Christopher X. Shade is author of the novel The Good Mother of Marseille (2019) and the book of poems Shield the Joyous (2020). He is co-founding editor of Cagibi. His stories and book reviews have appeared widely, and he has won story awards including the 2016 Writers at Work fellowship competition. He teaches fiction and poetry writing at The Writers Studio. Raised in the South, he now lives with his wife in New York City. His debut book of poems Shield the Joyous is about the loss of loved ones to the disease of addiction.

Established in 2016, Paloma Press is a San Francisco Bay Area-based independent literary press publishing poetry, prose, and limited edition books. Paloma Press believes in the power of the literary arts, how it can create empathy, bridge divides, change the world. We actively engage in “bayanihan”—a term which encompasses community strengthening and cooperation, and nourishing connections and shared identities. To this end, we have released fundraising chapbooks such as MARAWI, in support of relief efforts in the Southern Philippines; and AFTER IRMA AFTER HARVEY, in support of hurricane-displaced animals in Texas, Florida, and Puerto Rico. As part of the San Francisco Litquake Festival, we proudly curated the wildly successful literary reading, “THREE SHEETS TO THE WIND,” and raised money for the Napa Valley Community Disaster Relief Fund. In 2018, the fundraising anthology, HUMANITY, was released in support of UNICEF’s Emergency Relief campaigns on the borders of the United States and in Syria. Paloma Press continues to donate a portion of its proceeds to non-profits committed to working for racial justice, animal rights, marginalized communities, and climate change.

CAGIBI is invested in sharing the universal human experiences to be found in works of prose and poetry set within places unfamiliar to readers; thus, our expressed interest in international—or world—literature, and works in translation. CAGIBI is versatile in its purpose and mission to readers and writers. The journal concerns literature in which character conflict, ultimately story, is tied to place. The retreats provide unique and stimulating place experience. In one interpretation, le cagibi is the place at which a writer’s inspiration is rendered into story, or shaped into poem.